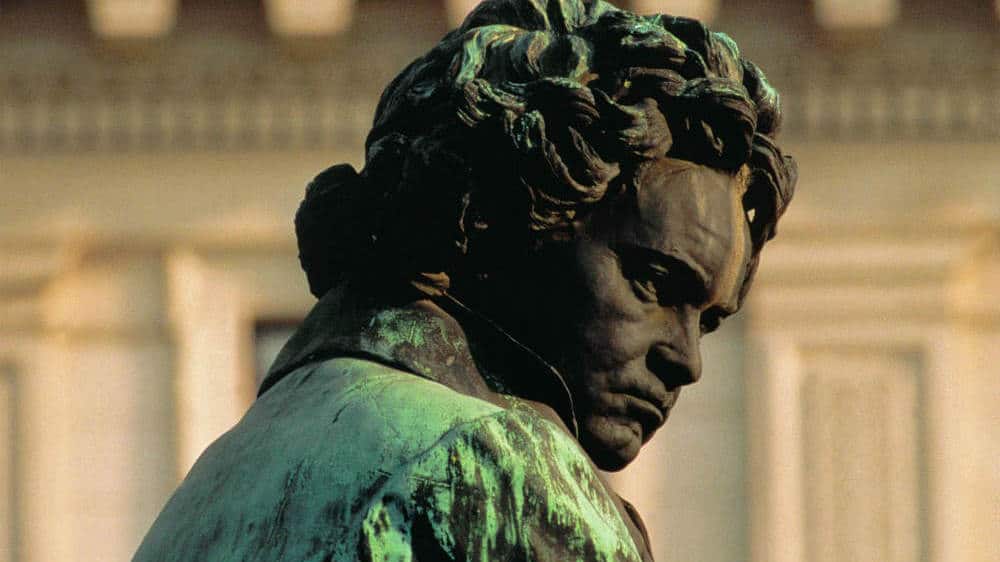 Beethoven: I know the meaning of life

At the midpoint of his lonely life, Beethoven wrote to a young woman that his chief occupation was philosophy, because ‘music is truly the mediator between intellectual and sensuous life’. He urged Elisabeth von Brentano to talk to Goethe about him so that she could understand that ‘music is the one incorporeal entrance into a higher world of knowledge which comprehends mankind but which mankind cannot comprehend.’

No composer before Beethoven ever made a statement of this kind, and very few after. Mozart, who rated his own abilities very highly, never presumed that he was doing anything more than adding works to the stock of public entertainment in fulfilment of the commissions that he received. Schubert was cut of the same modest cloth. Not until Richard Wagner half a century later did a composer presume to proclaim that he knows the meaning of life on earth, and Wagner could not have made that leap without Beethoven’s precedent.

Beethoven’s thinking is bound to the idea that music is central to human self-understanding and spiritual fulfilment. He goes on to say: ‘I must despise the world which does not know that music is a higher revelation than all wisdom and philosophy, the wine which inspires one to new generative processes, and I am the Bacchus who presses out this glorious wine for mankind… I have not a single friend, I must live alone. But I know that God is nearer to me than to other artists; I associate with Him without fear; I have always recognized and understood Him and have no fear for my music — it can meet no evil fate. Those who understand it must be freed by it from all the miseries which the others drag about with themselves.’

These utterances explain why Beethoven approached his art with such sacral seriousness and why he became a primary topic for every major thinker in the field of aesthetics from Arthur Schopenhauer to Theodor Adorno, which is a heavy burden for any musician to bear. It proved too heavy even for Schopenhauer who said: ‘I admire and love Mozart, and go to all concerts in which Beethoven’s symponies are played; but if one has heard much of Rossini, everything else seems ponderous.’ A perception of solemnity clings to Beethoven like a curse, deepened further by Wagner’s distortions of Schopenhauer in a sententious essay.

Much of the Beethoven statuary is grim and forbidding. 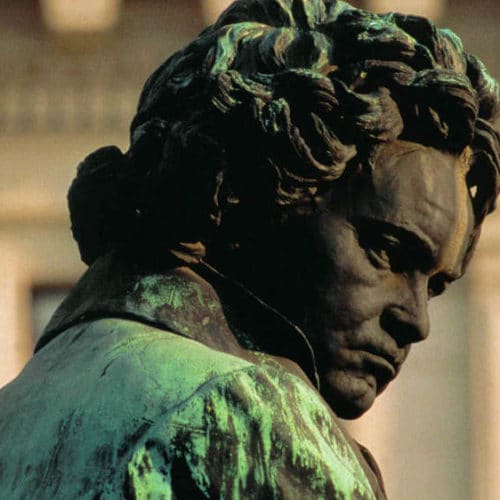 Did Beethoven never lighten up?

Well, of course he did. Even at his most sententious, in the seventh symphony, for instance, he writes a dance movement that literally lifts people off their feet with the instinctual fun and joy of being alive. The middle-period piano sonatas are riddled with twists where the composer, having carved a frown into our brows, blows it away with a gust of a joke. All of his concertos are trip-wired at unexpected junctures to yield an exchange of smiles between the soloist and the conductor. He was not the misery that many made of him.

Probably Beethoven is found at his lightest in the unconventional pieces he wrote for odd combinations of wind instruments, all of them dating from his early years in Vienna but updated and published much later. Take this work, first published at the time of the fifth and sixth symphonies:

Beethoven obviously knew Mozart’s works for wind ensemble and was determined to differentiate himself with a more progressive sound, albeit no less playful. He gives the liveliest melodies to the clarinets and bassoons, using the horns sometimes as no more than ballast. But his main concern is to get a conversation going between two players, most effectively and amusingly in the slow movement. Among a dozen or so recordings, I would direct your attention particularly to the slinky Vienna Philharmonic wind ensemble in 1950. The Berlin Philharmonic soloists who recorded in 1968 are altogether too self-important to get the dirty jokes. There’s a lot of horn in this piece, and not in a good way. Beethoven, who may have resented the instrument, takes his revenge with some horrible sets of triplets that must have been beyond the capacity of contemporary players.

There’s a civilised account by the UK-based Melos Ensemble from 1972, and an even smoother one by members of the Academy of St Martin in the Fields 20 years later. My preference, though, is for Anner Bylsma’s group L’Archibudelli, playing period instruments far more proficiently than they would ever have sounded in their period.

This is a prior sketch of Beethoven’s first string quintet, opus 4, and it’s much lighter in every sense, conjuring a sense of serenity and satisfaction with the universe. Beethoven has not yet had bad experience with orchestras and he draws quite affectionate noises from his ensemble. You would have to go a long way to find a sweeter recording than the one by stars of Herbert von Karajan’s Berlin Philharmonic: Lothar Koch (Oboe), Gerhard Stempnik (Oboe), Karl Leister (Clarinet), Peter Geisler (Clarinet), Gerd Seifert (Horn), Manfred Klier (Horn), Günter Piesk (Bassoon), Henning Trog (Bassoon).