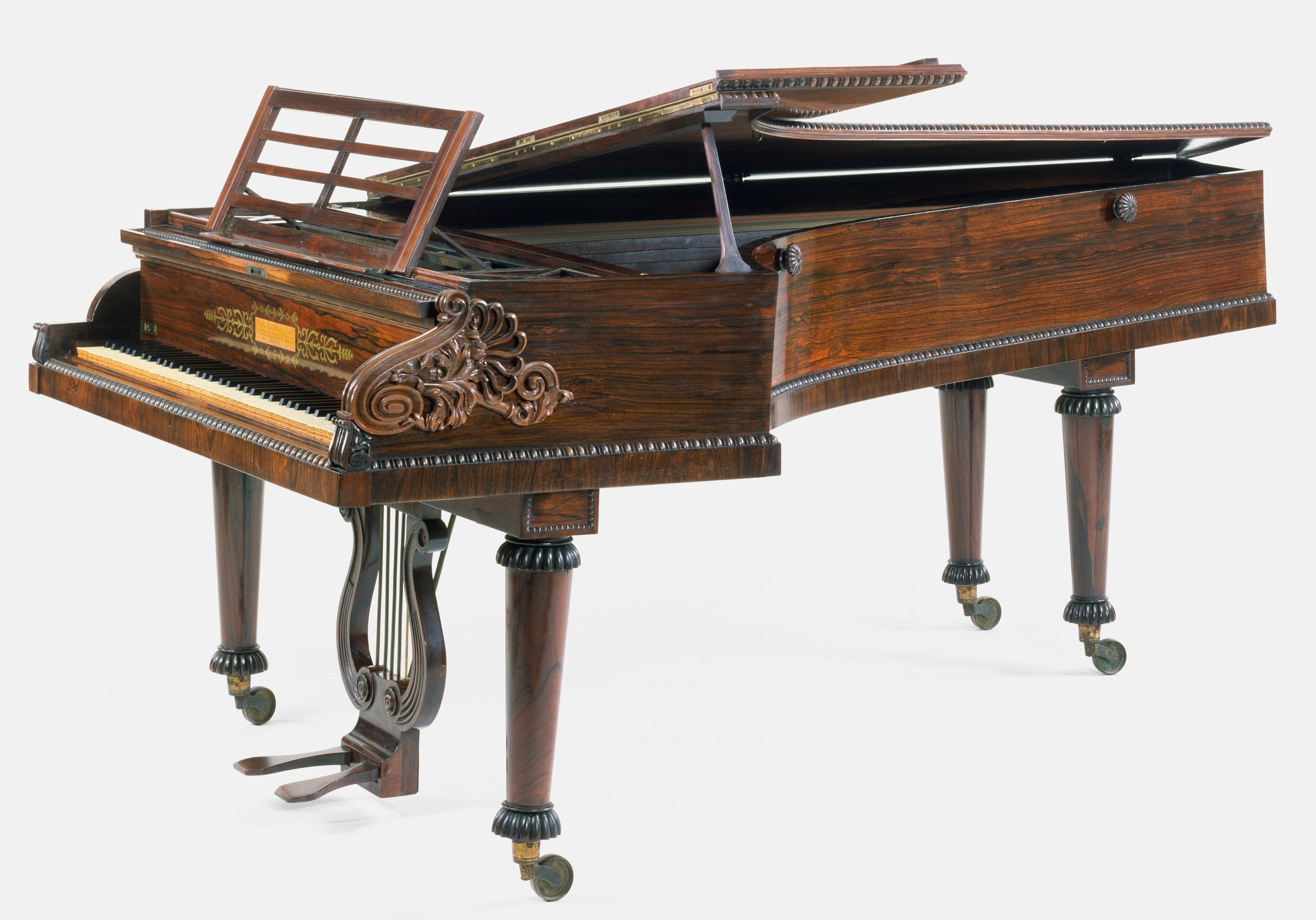 Beethoven and his one-stop piano shop

Before approaching one of the most underrated mature sonatas, let’s take a moment to consider the keyboards that Beethoven had at his disposal. The earliest was a mahogany instrument made by Anton Walter in Vienna, with a range of five octaves. Walter was the most expensive piano builder in the city and Haydn reckoned that only one of his products in ten was any good. Beethoven stuck with him until 1802 when, demanding an ‘una-corda stop’ like most English pianos, he found Walter unable to oblige.

‘Una corda’ is a term that appears in many of Beethoven’s piano scores from this time, sometimes with a German term for added clarity, ‘Mit einer Saite’. What he was after was surgical precision in the left pedal. As the mechanism shifts when the pedal is depressed, he wanted the hammers to pick out one single string, una corda. Simple? It was beyond the wit of Viennese makers.

Beethoven’s next pianoforte was a French Erard of 1803, ‘un piano forme clavecin’, with four pedals, including the essential una corda. It was an unsolicited gift from the Parisian maker, a mark of Beethoven’s growing fame. The instrument, on which the 22nd piano sonata would have been composed, can now be seen in the Kunsthistoriches Museum Vienna. Beethoven would later acquire a six-and-a-half octave Conrad Graf instrument, which now resides at the Beethovenhaus in Bonn.

The transformative moment came in August 1817, when Beethoven received an unprompted visit from Mr John Broadwood of  Great Pulteney Street, Golden Square, London. ‘I was introduced to him by his friend Mr Bridi, a banker at Vienna,’ recalled Broadwood. He was then so unwell, his table supported as many vials of medicine and golipots as it did sheets of music paper and his cloaths so scattered about the room in the manner of an invalid that I was not surprised when I called on him by appointment to take him out to dine with us at the Prater to find him declare after he had one foot in the carriage that he found himself too unwell to dine out and he retreated upstairs again. I saw him several times after that at his own house and he was kind enough to play to me, but he was so deaf and unwell that I am sorry to say I had no opportunity of marking anything like an anecdote…’ 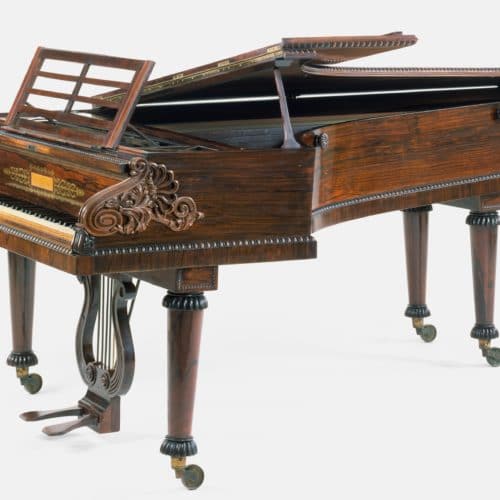 Broadwood designed for Beethoven a pianoforte with six octaves, two pedals and inlays of marquetry and ormolu. On its arrival in February 1818 Austrian Customs officials were so impressed that they waived all taxes and duties. Beethoven was delighted with the gift, ‘convinced it would inspire something good.’ It did: the late sonatas. On Beethoven’s death it was bought for 181 florins by the music publisher Spina who, in turn, gave it to Franz Liszt. It now holds pride of place at the Hungarian National Museum in Budapest. You can hear some of Beethoven’s last Bagatelles played on it here by Andras Schiff.  You will hear immediately how far short this instrument fell from the sounds that Beethoven was hearing in his head, how lacking it is in grandeur and dynamic range, how limited in expression. Nonetheless, these are the tools that the composer had to work with and it’s important for us to understand how he handled them.

The 22nd piano sonata, barely ten minutes long, eclipsed by its neighbours, the Waldstein and Apassionata, should not be overlooked. The dates on the manuscript overlap with the first sketches for the Fifth Symphony. As Beethoven’s fingers doodled on his Erard symphonic thoughts were taking shape in his leonine head. The first movement struggles to get going or hold the attention; the second is way too fast and full of itself. As the Canadian pianist Anton Kuerti once put it: ‘If the first movement was constipated, then the second movement suffers from the opposite ailment.’ The sonata is more an exercise than a fully conceived composition.

The Viennese pianist Paul Badura Skoda recorded it twice, initially on a modern piano, then on a period Erard. He was, I think, the first to attempt the entire cycle of 32 sonatas on period instruments and the results are unfailingly revealing if not always easy on the ear. Hammer strikes string with a dullish thud and the artist, no matter how fast he plays cannot conceal the failure of the machine to let ideas flow with the ease their composer intended. Badura-Skoda, who died a few months ago at the age of 91, found old pianofortes in Viennese junkshops in much the same way as Nikolaus Harnoncourt collected instruments for his period ensemble. His contribution to our understanding of Beethoven’s technical difficulties is immense and, as he grows accustomed to the instruments, he achieves real poetry in the very last sonatas. Throughout his enterprise, he maintained a close friendship with Jörg Demus, who was ploughing the same authentic furrows. 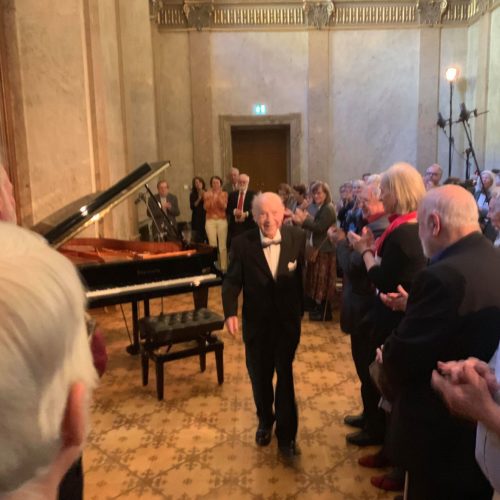 The other Beethoven cyclist on fortepiano is the Dutchman Ronald Brautigam, a virtuoso performer who conjures a deeper, more rounded sound from his instruments. Brautigam favours a Walter or a Graf, played in a sonorous church. His five-octave keyboard is a modern copy of the instruments of Beethoven’s time and one suspects it has been tweaked to give a smoother result than the junkshop bargains. Brautigam’s replica was built by Paul McNulty in 2007. Judge for yourself.

Demus, who is unfailingly challenging, does not appear to have recorded this particular sonata. It may be finally coming onto its own. There are thoughtful, historically consistent accounts on modern concert grands played by Jonathan Biss and Igor Levit, both recorded in 2018, leaders of the next exploration.