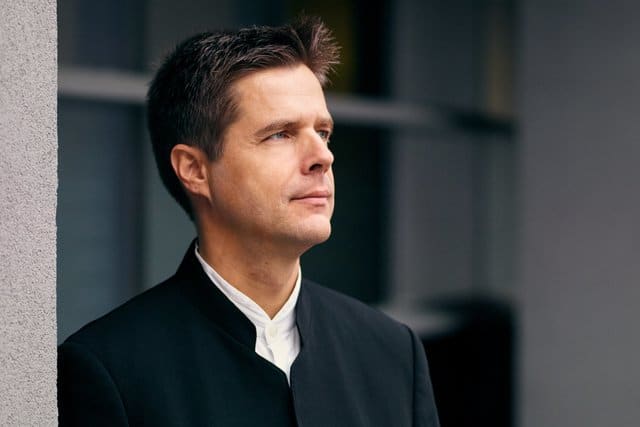 In one sense this was a sad occasion, David Gregory’s final concert after 42 years, having joined the CBSO as a first violinist in 1977. “Our last pre-Rattleite” was how Chief Executive Stephen Maddock described this popular player.

But he chose a remarkable farewell concert, one which introduced a conductor I’d never heard before (Christoph Koenig, pictured, standing in for an unwell Mirga Grazinyte-Tyla), an absolutely compelling baritone, Thomas E. Bauer, and the UK premiere of a CBSO Centenary commission, Jörg Widmann’s Das heisse Herz.

This is a rescoring for huge orchestra  — including some extraordinary percussion — of a song-cycle in the Germanic tradition originally for baritone and piano. A vestige of that original remains, Bauer weaving his way through the orchestra to join a lavishly decorative solo piano accompaniment in Klabund’s Liebeslied, one of the many texts from across two centuries which reinforce the familiar themes of the effect of love on this “ardent heart”.

Widmann uses his large forces unextragavantly, often homing in on a select few in sparse textures in the manner of Mahler, and the whole effect is one of post-Mahlerian, Second Viennese School angst and sardonicism, sometimes coarsely comedic, at other times open-heartedly vulnerable, and we often hear half-remembered quotes from Widmann’s great predecessors (I picked up Mahler, Schoenberg and Berg, but those may have been subliminal side-effects of this amazing score).

Bauer brought huge vocal versatility to Widmann’s often theatrical writing and Koenig and the CBSO collaborated with both colour and sensitivity. Widmann (born only four years before David Gregory joined the orchestra) was present here to receive a thunderous, extended and well-deserved ovation, which he modestly shared with the performers.

We had begun with two Elgar part-songs, The Snow and  Fly, Singing Bird. The CBSO Youth Chorus delivered them with an innocent purity of sound, but perhaps a more mature depth of tone would have enhanced this performance. Koenig, who only encountered these works for the first time this week, drew a shapely, expressive performance.

And there was an Elgar connection with the concluding item, Brahms’ Third Symphony, so much an influence on Elgar’s two accredited symphonies, and one to which he devoted one of his University of Birmingham professorial lectures.

Balances between the lithe strings and portentous wind were initially not well-judged, but the woodwind in particular distinguished themselves by casting a sunny glow, dispelled at times by starkly spectral sounds.

« The Met pretties up Grigolo’s absence