The death of Mariss Jansons, while profoundly mourned, caught his Bavarian Radio Symphony Orchestra in the midst of succession planning.

The names in the frame are those in the headline above. Nézet-Séguin stepped in for Mariss successfully last summer. Welser-Möst and Simon Rattle are due to conduct in Munich in the coming weeks.

The BRSO is Germany’s most accomplished orchestra, outside of Berlin. It has the ear of the world’s most successful conductors.

A more urgent problem is faced by Salzburg, where Jansons was down to conduct the keynote Boris Godunov production this summer. They will be on the phone to Gergiev some time today. 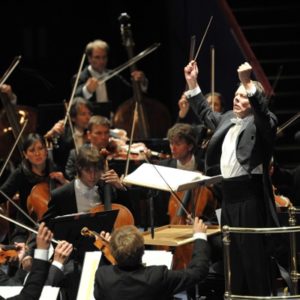 BRSO with Jansons at the Proms. Photo: BBC/Christodoulou