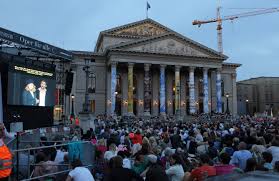 Europe is unusual – it can monetise culture

From culture columnist Janan Ganesh in the Financial Times:

… In the 1960s, Europe’s power to bewitch outsiders with its cultural riches was an unambiguous asset. As the continent feels its way gingerly into a very different century, I question whether that is quite so true….

None of which is to pretend that Europe is a unique store of genius. China and India are much older civilisations. But they have been poor enough recently enough to be inoculated against lethargy. The US dominated many or most art forms in the past century. But those feats are not so old as to (yet) be a source of complacency. No, Europe is unusual in the extent to which it can monetise its cultural legacy, even its built environment, and draw status from it. If the result is a relative lack of energy, it did not matter when much of the world was cut off by ideology. It matters rather more in a century of ferocious competition….

Does the baton pass from father to son? »