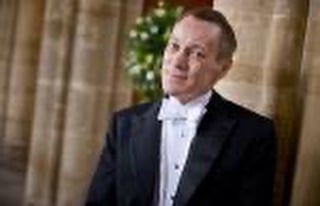 Friends are sharing news of the death of John Whitfield, founder of the Endymion Ensemble and a conductor who was often called upon to perform at state occasions. For 15 years, from 1991 to 2006, John put his career partly on hold while working as assistant to his teacher, Sir Charles Mackerras.

He commissioned works from Birtwistle, Nyman, Turange and others, and was one of the outstanding bassoon soloists of his time. As a teenager, he was principal bassoon of the NYGB and the EU youth orchestras.

Chi-chi Nwanoku writes: RIP dearest John Whitfield. You were one of the most magical bassoonists I ever heard. I’ll treasure the many wonderful memories of our Endymion Ensemble concert days & will never forget your most glorious lyrical & beautiful sound. Love & miss you

Francesca Carpos says: I’m very sorry to read this. John’s upcoming wind ensemble concert at the Wigmore Hall was announced at the Royal Society of Musicians just two days ago. He has bravely fought ill health for a very long time.

« 9/11 violinist dies for want of US health care