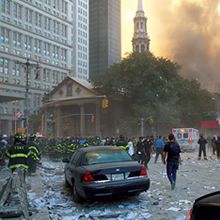 9/11 violinist dies for want of US health care

The New York Times has a chilling obituary of Marya Columbia, a violinist who rushed to the 9/11 devastation scene to bring comfort and music to rescuers and survivors. She joined an ad hoc string quartet at St Paul’s Chapel and played there every Monday morning for nine months.

Sam Roberts reports: In mid-2018, Ms. Columbia developed a persistent cold. X-rays disclosed a tumor in her lung. Ms. Columbia’s smoking habit may well have contributed to her disease, but doctors suggested that the lung tumor, which metastasized to her brain, also may have been related to toxins she inhaled near the World Trade Center site.

She was initially refused free care as a responder under the World Trade Center Health Program.

And a background piece by her niece here.

Marya had a varied freelance career as principal second violinist at Saratoga Opera, regular player at New York City Opera and teacher at the Bronx Conservatory. She studied at Mannes and Peabody.

« 50 years a music critic, still dishing it out