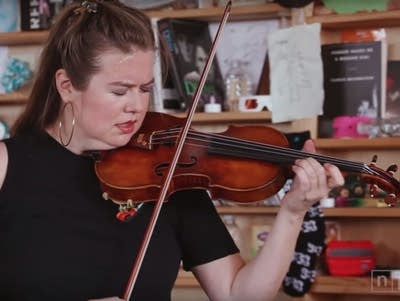 The violinist, who gave an account in July of historic sexual abuse by her Curtis professor, has written to the head of the institute demanding to know why nothing has been done.

It’s a tough letter (you read it here first).

October 30, 2019
Dear Roberto:
While I appreciate your note, I have some fundamental issues with the way you and your Board of Directors have approached my letter to you, dated August 12, 2013, and your collective response to the subsequent revelations in the press of my past abuse.

When I first shared the information of my abuse and rape at the hands of a pedophile in the employ of Curtis with you and your Board of Directors, you pledged to diligently investigate. Both Elizabeth Warshawer and the Institute’s attorney indicated that a report would be rendered following the investigation and that a copy would be shared with me.

While we now know that a report was written, when Stephen Judson asked you to share it with me, you at first denied knowledge of a report and after a number of subsequent written requests, acknowledged the existence of a report which you declined to share with me. I now know why you declined to share the report, having read it in the Philadelphia Inquirer in July. Your, and the Board’s commissioned investigation was designed not to arrive at the truth nor to safeguard the children and other students currently attending Curtis, but rather, to understand what liability existed for the school as a result of the criminal activity there which was both condoned and facilitated by members of your staff.

This was disappointing to me.

Since the day the public revelations of these crimes were revealed in the media, no one from your office or Board has:
1. articulated any regret for how I was victimized;

2. investigated the events of 1985 and 1986; 3. contacted witnesses to Robert Fitzpatrick’s meeting with me in which he refused to protect me from Curtis’ employee, a pedophile; or 4. explored the numerous other cases of rape, sexual abuse and sexual coercion, which occurred with the knowledge of employees of Curtis.

You and the Board have failed both this venerable institution and the Curtis community.
Serious crimes were committed and we now know that dozens of other children and women were affected by this pattern of abuse, neglect and negligence by senior Curtis staff.

So, to address your initial question, several things would need to occur before I meet or speak with you on the telephone:
1. You and your Board of Directors would need to publicly acknowledge Curtis‘ failure to protect me as a minor from a pedophile;

2. You would need to engage a law firm such as Debevoise & Plimpton, LLP in New York; the law firm which acted for The Cleveland Orchestra in its recent investigation of sexual misconduct within the orchestra’s ranks; to conduct a full investigation free from interference from either you or the Curtis Board of Directors;

3. You would release the report publicly making it available to all Curtis Alumni, Board of Directors, staff, students and the public;

4. You would speak to RAINN (Rape And Incest National Network) about establishing a hotline run by them, instead of the current service you have engaged which call center staff are inadequately trained in trauma and sexual abuse, victims are encouraged to be very brief about their abuse, and are advised that their anonymity will likely be compromised and cannot be guaranteed.

Once you have met these conditions, I will be pleased to speak with you and members of your Board to discuss ways in which Curtis can better meet its responsibility to its students and stakeholders.
Sincerely,