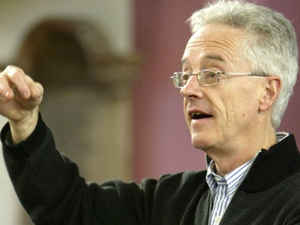 Northern baton takes his rest at 73

John Pryce-Jones has been talking with fetching humility about his long career, now ending, as principal conductor of Northern Ballet, as well as Halifax Choral Society and Opera North.

‘If all I had to do was stand up, perform and conduct, it could be mega fantastic, but you go through a lot of hard work, self doubt and dealing with a lot of people who are emotionally exposed all the time, which is difficult. But, probably, the rewards are greater than in some other careers.’

‘…Coming back to amateur singers was quite a shock but I began to realise that it was equally fulfilling to work with relatively or completely untrained singers, who had less or no preconceptions of singing technique.

‘I am passionate about voices and singing technique – the latter is a controversial art but thanks to a wonderful teacher and friend, Gerald Wragg, I have had great success helping and improving singers both trained and untrained of almost all ages. This has made my long association with the choral society hugely rewarding.’

ARD needs rethink after no first prize at bassoon final »