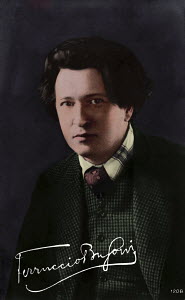 Is Busoni historically greater than Schoenberg or Stravinsky?

Joe Horowitz makes a case for the leonine Beethoven lookalike in a new festival essay:

In two respects, Busoni surpasses Schoenberg, Stravinsky, and the others: the charismatic appeal of Busoni the man and the stature of Busoni the performer.

(Kurt) Weill’s encomium reads in part: “It is strange enough that such a phenomenon appeared in our time. Even in the past we find few figures in whom the man and the work are thus unified . . . We are bound to think of Leonardo. In him also we find that comprehensive spirituality which strives to open up all attainable spheres, that sublimity above life’s trivialities.” Many another testified to the spell cast by Busoni’s idealism and intellect. His letters document a hypnotic personality, aloof yet prone to acute humanistic observation. He was born in Empoli in 1866 – and so straddled two centuries. His father was a nomadic Italian clarinet virtuoso out of Fellini. His mother’s lineage was German and Jewish. No less than Mahler (who esteemed him), he embodies qualities of paradox and irony both implicit and manifest. His Faustian striving is oddly leavened by espousals of Mediterranean clarity and proportion…

Busoni’s influence, in my view, was far greater than his composing legacy.