Our correspondent Joel Valkila reminds us of the elusive Oreste Bodalew:

By accident I came across with two small articles about Orest Bodalew (1907 St Petersburg – 1965 Helsinki), probably Finland’s most successful pre-WW2 concert pianist. Bodalew was found in the streets of Finland in 1918 at the age of 11, abandoned by his parents (who had returned to Russia). Fortunately, he was adopted into a family of music lovers and became a skilled pianist.

During the 1920s and 1930s, Bodalew mainly lived in Berlin and Paris and in London, and spent his autumns in Biarritz. He had his Wigmore Hall debut in 1939. (His other performances in London were sponsored by the Duchess of Kent). In Paris, he was teacher at the Sergey Rachmaninov Conservatoire for 6 years, and had concerts at the Gaumont Palace theatre to audiences of up to 6000 people.

In 1930s, Shura Cherkassky once travelled to Bodalew’s hometown in Finland to meet him. Together they walked to the border and had a glance at their ex-homeland.

Bodalew gave his last public recital in Paris in 1947 at Salle Pleyel. The war had cancelled his US tour. He had got married in 1939 and now devoted more time to his family and children, gardening and raising chickens.

When Bodalew died in 1965 his death was announced in the French radio. In Finland, a search was done by his private pupils to find any recordings of his playing. The result was depressing: his earlier recordings for the radio had already been wiped over, and only three small amateur recordings from a performance at the dedication ceremony of a primary school in 1955 had survived ! (By coincidence, the director of the school had fallen ill and had asked somebody to record the playing for him) 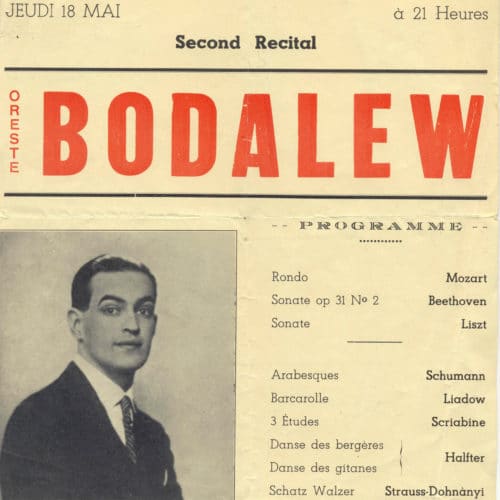