So I’m in Berlin airport and I have no passport…

Take a deep breath. Just because you are next in line for passport control in Berlin, heading to your Wigmore concert in London, and you reach into your special pocket which ALWAYS contains your passport, and find emptiness, doesn’t mean that you won’t, in fact, walk out onto that stage in 9.5 hours and take a bow. Immediately upon feeling the smooth emptiness, a flash – my passport on the expansive marble desk at the front of the Sadt Hotel in Bolzano, Italy – a 2 hour drive through the mountains to the closest airport, Innsbruck, which is notoriously plagued with weather delays. The Stadt Hotel, today‘s unlikely hero, is a stately, light pink, Grand Hotel – the kind that hands you your single key, attached to a heavy, worn wooden tear-drop, which has its own place in a wall of wooden cubbies, and which holds not only your key when you leave the hotel, but also your passport for the duration of your stay.

My mother, here on a visit and to lend a much-needed hand with the girls during this heavy touring and planning period, was with me in Berlin and had just gone through passport control – I quickly pulled her back, trying to look casual, and we retreated to the check-in area. If I was going to try to get past the passport control, I would need to be as prepared as possible.

My mother looks at me – in a panic. What are you going to do? I say – just wait and watch – amazing things are about to start happening. I don’t know what, yet, but you are in for an incredible inside glimpse of the workings of this quartet. First – I wait for my colleagues before proceeding. Second, gather as much supporting material as possible. I have copies of my passport and documents on my phone. And an invitation from Wigmore. Within minutes the quartet has assembled. By that time, I have alerted the quartet assistant, and made contact with the hotel. We have 40 minutes until takeoff. As the cellist checks in, my mother watches the instruments as the violist and I run to the airport police station, hoping for some kind of letter of exception.

The first plan is to try to just get through the German side of passport control. Then, while en route, our team can come up with the next plan – how to get me through the other side. But we need as much ammunition as possible before going to the window. We run to the police, but after several minutes, it is clear that they will not budge – if it were within EU, they could help, but no-go on England. As we ran back, my phone began to light up with a series of photos I had asked of the hotel – a staff member holding my passport, my passport in front of the hotel sign, a statement that they were currently in possession of my passport.

In the mean time, we began to work on plan 2. There was no physical way for me to get to Bolzano and on to London by this evening. The only chance is to find someone to get the passport to me. I asked the hotel if they could think of anyone willing to be involved, while calls/texts/emails went out to the Bolzano presenter, the composer from Bolzano whose piece we were playing that evening, and now our manager and travel agent were in on the loop. Our network was quickly expanding, with each person brainstorming and coming up with potential plans, no matter how crazy or inconceivable.

And so – we decided to try the passport window. Twenty minutes until take-off. What we had – documents on my phone, my German drivers license, letter from Wigmore, and the secret weapon – elderly mother, who would have to travel without her daughter. Two members of the quartet went first, and I calmly put down my boarding pass. When he asked for my passport, I swiped the phone and showed him the photo. A quick look up from him signaled my first attempt at a smoke screen. In German (I actually did quite well here, under pressure), I explained that the Italian hotel in Südtirol, a very old hotel (shaking my head), had forgotten to give my passport back yesterday, and I just now realized it. But I had photos of my passport, and my actual passport was on its way to London as we speak (thank you, granddad, for your tutorials on a variety of bluffs that work in a poker game). If I could just get to London, everything was ok. After some back-and-forth, and help from my colleagues, we were advised that if I could get approval from British Airways directly, I could go through.

Going to the counter, speaking with the supervisor, plan 2 was well underway. We had 10 minutes left before takeoff, and the airline wasn’t playing nice. Time for everyone to go through, keeping in touch and working on all avenues. The violist said – you know plan B – go towards England, staying in Germany – find courier to meet you there with passport – continue on to London. My mother looked panicked – I asked Quartet to take care of her – help her with her heavy bag and get her to her hotel. She didn’t know where it was or how to contact me – I said – just go – I will send you information – concert is at 7:30. We hugged, just in case I wouldn’t make it, and with a final flurry of activity, they passed through and onto the flight.

Plan B – find the German hub with the correct flight options, closer to England (I can travel within Germany on my Visa), find someone to meet me there with passport – but we have to go – now!!! The presenter, composer and hotel are all looking for someone. I remembered the nice woman working the breakfast buffet – we had a chat. Turns out she is willing to come. With our amazing travel agent/magician Bruno on WhatsApp, we quickly went to plan B. The hotel wanted to know about flights, details – I said – we will send that to you on the way – get her into a car immediately and go towards Innsbruck, and we will take the next step.

As she was getting to Innsbruck, her personal information made it to Bruno, who triangulated a flight plan – I arrive in Frankfurt (in the direction of London) at 14:55, Mira arrives in Frankfurt at 15:55. enough time for me to find her gate and meet her, and a slight buffer for weather delays, run to next flight, arriving in London 17:45 (19:30 performance). Rush hour in London.

Last minute information to quartet before they take off for London – have courier, see you on stage.

Now – I have some minutes to put the level-2 emergencies in order. Call Jason – he has the hard copy of my German Visa (he is at the Auto Office getting new plates) – he is 60 minutes away and can come with the Visa, my expired passports, and my birth certificate. Just in case. Contact Wigmore, maintain contact with currier, get cash for her payment, re-assure composer, get hotel details to mother, call hotel to confirm she can check in instead of me, plug in devices, drink cappuccino.

Jason and I do a car window pass-off of documents and a thumbs-up, my other hand texting the courier – she has made it to Innsbruck. I get on my flight to Frankfurt, closing my eyes immediately – I will need every bit of energy as the day progresses.

On my side are: external battery, no checked luggage, emergency sandwich. Before Children (BC) I used to watch this show called „The Amazing Race“, where teams of people would throw themselves around the world while eating live insects, rappelling down gargantuan termite mounds, trying to race to the finish through a seemingly impossible puzzle of cultural and transportation emergencies. I was always offering bits of advice to the screen – and Jason would say – you should apply for this show, but you don’t need a partner – they would just slow you down. I did, actually, apply for „The Apprentice“, and they contacted me – I wasn’t exactly perfect for that show, but they wanted to offer me a spot in a reality television show – 20 artists on a desert island – last person standing wins – could I clear my schedule for 6 months, and how do I feel about spending a significant amount of time in a bikini?

Anyway – back to my own Amazing Race. Take care of the essentials. Hydrate, grab food when you can, go to the bathroom on the flight, sleep, keep your battery on 100%.

Landing in Frankfurt, I was eyeing the flight from Innsbruck, as it became delayed. My buffer was becoming slimmer. But, she was on the flight, with my passport, and I found the portal where her bus would drop her. I had the route to my gate charted, I sent her a photo of what I looked like, and where exactly I would stand. As the minutes ticked by, slicing away at my narrow window, I saw her coming down the corridor. I called „Mira!!!“, had a hug, took a quick selfie, got the passport, and shoved a wad of cash into her hands. She would make it back home, with some luck, by 2 AM. A 15 hour trip.

I checked with Wigmore – I will jump in a Taxi – unless they suggest otherwise. They gave me a suggested public transportation option instead – at least I wouldn’t get caught in traffic. It is at these moments – one small mis-step (which often happens at the final moments of a situation) and the whole game is lost. I downloaded and registered for online tickets – I can buy my tube ticket now and just scan my phone at the turnstiles. That will shave off a couple of minutes.

On the flight to London, I was again thankful that I travel with only two items – my backpack and violin. Recalling one of my tastier bits of advice for the teams on „The Amazing Race“, I asked to be reseated as close to the front of the airplane as possible, so I could get to the customs first. Even with a smooth ride through customs, this was going to be tight – they may have to delay the start of the concert, or have an impromptu talk with the composer.

Running to the train, while letting everyone know I was on target for a 7:30 start-time, I got to the juncture of track 1 and 2, with no-one on the platform to ask, both with trains ready to go, doors almost closing. I didn’t have time to think – I picked the one on the left. 50/50 chance. I lost that bet, but righted it in time to find myself at the Bond Street Station, walking briskly towards Wigmore. The crowd was outside, and I entered, seeing my mother at Will-Call. I said a quick hello, and pushed past the audience to enter the hall. They held the door long enough for us to have a mighty short sound check, I changed into my concert clothes, and we were off! 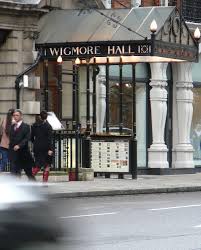 Here I am, heading back to Berlin (I am glad to have the same pillow for a couple of days), and guess what? I never did have to eat that emergency sandwich. Some day I may need it, when I have an actual emergency.