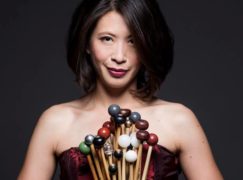 In all US symphony orchs, there are just 4 women percussionists

2 in Chicago (including principal Cynthia Yeh)

1 each in Hawaii and Rochester.

We also hear that the number of young women inducted into the New World Symphony has been falling year by year. The orchestra does not use a screen for auditions.

« Are you game for five acts of Gounod?