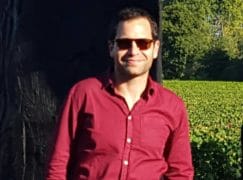 From a media release just in (sorry about the clumsy syntax):

Askonas Holt Ltd. announces today the creation of a new position on its leadership team, Director, Global Head of Strategy & Innovation, and the appointment of Sean Michael Gross to it. With his arrival in London this December, Sean will become the first external hire immediately to join the Askonas Holt Board of Directors and will report to Chief Executive Donagh Collins.

Sean comes to Askonas Holt from 21C Media Group, where he is currently one of four principals and serves as Executive Vice President & Chief Strategy Officer. In his new role as Askonas Holt’s lead strategist, he will work alongside Donagh and the board to realise a future for the company that strengthens its position as a global leader in artist management and touring, while also developing new and innovative ways to serve its clients and the international performing arts community….

Named one of Musical America’s 30 Professionals of the Year in 2017, Sean is credited with spearheading 21C Media Group’s transformation over the past decade into a fully integrated public relations and digital agency, allowing the leading New York- based firm and its clients to flourish in a rapidly changing environment. In his 11 years with 21C, Sean contributed to the firm’s consistent growth by diversifying its services beyond publicity and forging relationships with prominent artists including Daniel Barenboim, Plácido Domingo, Elīna Garanča, the late Dmitri Hvorostovsky, Yo-Yo Ma, Audra McDonald, Anna Netrebko, and Michael Tilson Thomas.

Askonas, although increasingly aggressive, has never gone head-hunting before. This could mark the start of a transatlantic trade war.

The biggest ever composer box »