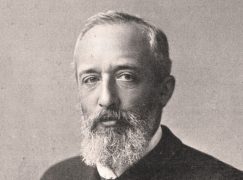 Germans get in a tangle over Wagner’s Jewish conductor

The Munich music director Hermann Levi gave the world premiere of Parsifal at Bayreuth in 1882.

A rabbi’s son, Levi had to endure antisemitic sniping from the Master through the rehearsal period. In letters to his revered father, he bit his bearded lip

Wagner died the following winter and Levi continued as music director in Munich until ill-health forced his retirement in 1896, at the age of 57. He then made a late marriage to Mary, widow of a wealthy art historian. When he died in February 1900, she created an imposing tomb for him near their villa in Garmisch-Partenkirchen.

The Nazis destroyed the mausoleum, outraged to find that their Master was involved with a rabbi’s son.

But the burial plot remains, and there lies the problem.

The present landowner, a former town councillor, called in the Mayoress and a rabbi to open the coffin, with a rabbi in attendance. Levi’s remains are still there. But the village – which gives pride of place to Richard Strauss’s grave – doesn’t want him there.

They have asked for the remains to be reburied in the Jewish cemetery in Munich.

Munich, it seems, is none too keen.

The media is waking up.