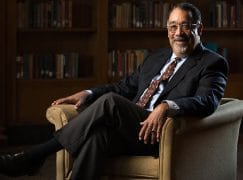 Dean of Eastman dies at 72

Paul Burgett, an outstanding figure in US music education, has passed away after a short illness.

The University of Rochester has published this appreciation:

The eldest of six children born to an African-American father and an Italian-American mother who had to cross the border into Illinois in order to be married, Burgett grew up in 1950s Missouri, knowing that he and his family were different. “We didn’t have the word ‘biracial’ back then,” he told Rochester Review in a 2015 profile, and he acknowledged that “the veil,” which W.E.B. Dubois described in The Souls of Black Folk, also described how he and his siblings would be looked at by many white Americans, and was never wholly lifted.

Supported by his musician parents (his mother an organist, his father a concert baritone), Burgett earned recognition as a young violinist, coming to the attention of family friend Edward Ormond, then a violist with the St. Louis Symphony. Burgett auditioned for Eastman while in St. Louis and earned a place as a member of the Class of 1964.

In April 1968, when Martin Luther King was assassinated, then senior Burgett was asked to address a convocation held in Kilbourn Hall to memorialize King.

“It is quite clear that Dr. King recognized the social ills of this nation—ills which were manifest through the convenient tools of racial injustice,” Burgett said in his remarks. “But ills which in fact lay much deeper than that.

After graduating in 1968, Burgett was offered a fellowship to work on his doctorate but postponed his studies to join the US Army Reserves, where he played the tuba in a military band. He returned to his studies at Eastman after serving as executive director of the Hochstein School of Music and Drama. He taught music half-time in the Greece Central School District while he earned his Ph.D., and became an associate professor of music at Nazareth College of Rochester after graduation.

For his doctorate in 1976, Burgett explored the music of black classical composers, a subject that until that point had not been much chronicled but one that his advisor, Paul Lehman, enthusiastically supported. His finished dissertation was titled “Aesthetics of the Music of Black Americans: A Critical Analysis of the Writings of Selected Black Scholars with the Implications for Black Music Studies and for Music Education.”

Advocating for the history and creativity of black classical musicians and composers was never far from Burgett’s heart. He championed the Gateways Music Festival, a multiday series of concerts, performances, and other events designed to provide classical musicians of African descent a performance showcase of their own. The biennial festival was brought by an Eastman faculty member to Rochester in 1995. Burgett helped nurture and strengthen its ties to the Eastman School of Music; at the time of his death he was chair of the Gateways Board of Directors.

Burgett was named dean of students at Eastman in 1981 and drew on his own experience to improve student programs, including planning for Eastman’s Student Living Center.

At Eastman, he first began giving his signature presentation, now known as “The Fiery Furnace.” In the address, which he continued to present to first-year students and was scheduled to deliver again this fall, he describes a University education as a journey that students embark on, one in which they will have to confront ideas and perspectives, challenges and opportunities that will mold their character. Education is, he noted, much like a furnace, a prospect that can seem terrifying.

“But you will step out of that furnace strong, tempered like steel,” he told students, also promising “We will not abandon you. We will never abandon you.”

In the speech, he articulated what became something of a mantra as he helped students find their path in life. “Passion and ability drive ambition,” he often said, noting that picking a major is not nearly as important as caring deeply about a topic so much that you tap into and develop your abilities to find success.

After seven years at Eastman, he was named University dean of students, a move that established his home base at Wilson Commons on the River Campus but allowed him to keep a hand in the life of his beloved Eastman School.

“Paul is special in so many ways. As a proud alumnus, he was indefatigable in his support of Eastman, as well as the University as a whole,” said Jamal Rossi ’87E (DMA), the Joan and Martin Messinger Dean of the Eastman School of Music. “He was a larger than life figure with a gregarious and outgoing personality, who simultaneously was among the most thoughtful and sensitive individuals in any group when thinking about the needs of others. He will be deeply missed as a leader, a colleague, and especially, as a dear friend.”

As dean of students, Burgett often described his role as gaining access to the “backstage” of students’ lives, getting to know them in ways that allowed him, student services staff, and other faculty to offer better support and advice to orient cocurricular programs to better correspond to the needs of students. His gregarious personality and deft ability to read the emotions of others made him particularly successful at advising students.

In a nod to his own upbringing, in which his father and mother encouraged his ambitions as a musician and educator, Burgett often referred to the students he got to know as “Doctor” in reference to their aspirations as scholars and professionals.

“It was my privilege to have participated with Paul in his many interactions with the Board of Trustees and in many of his community activities over more than 30 years,” said G. Robert Witmer Jr. ’59,  Chairman Emeritus of the Board of Trustees. “Paul was a positive and unforgettable influence on more people than anyone I have known.  He was, and remains, the epitome of what the University of Rochester is, and works to become.”

Burgett took on a high-profile assignment in 2015, when he and Feldman, then the dean of the College, co-chaired the President’s Commission on Race and Diversity. The 20-member, University-wide committee recommended ways to improve Rochester’s programs for increasing diversity among students, faculty, and staff, and for creating a campus environment that values diversity in its many forms.

In 2015, Eastman awarded Burgett a Distinguished Alumni Award and asked him to address the graduating class.

Throughout his tenure, he regularly taught two popular undergraduate classes— Music of Black Americans and History of Jazz — as a faculty member in the Department of Music in the School of Arts & Sciences. In a 2010 Rochester Review article titled “101 Things to Do Before You Graduate,” writer Dana Hilfinger ’10 cited Burgett’s History of Jazz class as No. 12.

In 2016, the University named the Paul J. Burgett Intercultural Center in recognition of Burgett’s long service, a tenure in which—as a board resolution notes—he was a “tireless advocate for justice and equity for all.” Delighted with the honor, Burgett wrote a note of thanks in which he said he was “an intercultural product . . . from birth.”

Located in Douglass Commons as part of the building’s renovation into a student-focused campus hub, the center brings students together to work with and learn from those from other cultures, backgrounds, beliefs, socioeconomic statuses, sexual orientations, and perspectives.

“Dean Burgett was a great mentor and advocate.  I was enthralled when the Center was named in his honor in 2014 and then when we dedicated the new space in 2016,” said Jessica Guzman-Rea ’10W (EdD), the inaugural director of the Burgett Center. “He always lent an ear to hear from students and would always give me the warmest hug when we saw each other. He will be greatly missed.”

As a resident of the Greater Rochester community, Burgett also threw himself into community service in the region. He served such groups as the Urban League, the Hochstein School, the Genesee Country Museum and Village, the Rochester Arts and Cultural Council, the United Way of Rochester, the George Eastman Museum, and many others.

He was also a leading force behind the University’s support for the Rochester Fringe Festival when the multiday performing arts festival was launched in 2012. Many of the performers for the festival have University connections and many of the events are staged at Eastman venues.

At the University, he co-chaired the faculty and staff component of the Meliora Challenge, Rochester’s historic $1 billion fundraising campaign.

As he stepped away from his role as an administrator—a label he often eschewed—he turned his attention to the history of the University. He took on the role of University storyteller, often traveling to alumni gatherings around the country to make presentations about the institution that meant so much to him: “Where we came from, who our predecessors were, on whose shoulders we stand, and our responsibilities as stewards of their legacy.”

“Now in the twilight of my professional career, I have become fascinated by the story of the University that educated and trained me; sent me out into the world as a well-prepared and confident high school and college music teacher, performer, and music administrator; and then welcomed me back 34 years ago and turned me loose on its campuses and in its halls and classrooms to join the faculty, students, and staff in the work of its auspicious and noble mission.

“I have become a serious and passionate student of our history and believe that all of us who claim an association with the University, in any form or manner, will want to learn more about the institution that affected our lives deeply.”

“Paul read everything from the George Eastman-Rush Rhees correspondence to Annual Reports to the Campus Times,” remembers Melissa Mead, the John M. and Barbara Keil University Archivist and Rochester Collections Librarian. “And in telling our story, he would highlight past examples of what he called ‘inspired, effective, and generous leadership,’ and his audiences always knew that he exemplified those qualities.”

In making his presentations, Burgett would often joke that he himself had witnessed much of that history, having been part of the University since “before the Earth’s crust began to cool.”

The transformations that took place during Burgett’s history at Rochester sometimes took even him by surprise.

In the 2015 profile for Rochester Review, he said that he found it hard to believe that he had been at Rochester for 50 years.

“That’s not been relevant to me,” he said. “Because I hang around students who never age, do they? They’re always 18 to their mid-20s or so, some a little older. And when they get to the end of their studies, they leave and are replaced by newcomers.

“So I forget how old I am, until I look in the mirror and see my father looking back at me—at which point it’s, well, startling, I suppose.”

There will be a private memorial service and a celebration of Paul’s life at a later date.

Messages of condolence to be shared with Paul Burgett’s family can be sent to his friend and longtime assistant at the University, Kim Truebger, by email to kim.truebger@rochester.edu or in hard copy to Box 270011, University of Rochester, Rochester 14627-0011.

« Jamie Barton: I got stuck on the Met stage