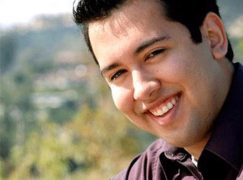 All of us at LA Opera are incredibly saddened to learn of the passing of tenor Andres (Andy) Ramirez. Andy has been a part of the LAO family since he was 11 years old, when he sang in the 2001 production of Puccini’s Tosca as a member of the LA Children’s Chorus. He participated in one of the first Opera Camps and continued his musical education at Los Angeles County High School for the Arts (LACHSA). He was 28 years old…

Last season, Ramirez made his debut as a member of the LA Opera Chorus in The Pearl Fishers. Mezzo-soprano Erin Alford recalled how excited they both were to be singing in their first chorus roles with LA Opera.

“Andy was a fabulous tenor and seriously, one of the kindest individuals I’ve met.  He also taught the opera workshop at LACHSA and his students LOVED him,” Alford said.