It’s asparagus time in Munich and there are long evenings to fill.

The Bavarian Radio Symphony Orchestra won ovations last night for a new work by Helmut Lachenmann, which must have cost the GDP of a central African nation to rehearse and perform.

Lachenmann, 82 and obscurantist as ever, writes at his own dimensions. The work lasted 45 minutes. 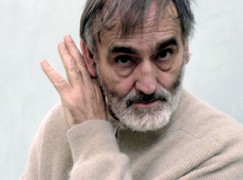