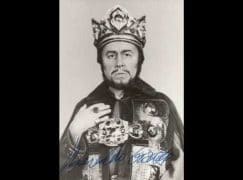 Death of a prominent Italian bass, 85

The death has been announced of Bonaldo Giaiotti, one of the foremost bass singers of his time.

In 1960, three years after his Milan debut, he sang for the first time at the Met, returning annually for 25 years. He was a summer fixture at the Arena di Verona for three decades. Like many of his generation, he kept his repertoire small – just 30 roles.

He was often cast as Raimondo in Lucia di Lammermoor, Ramfis in Aida, Timur in Turandot, and he was extensively recorded.

His wife, Alice Weinberger, predeceased him by a matter of months.

« Sistine Chapel’s US tour is off