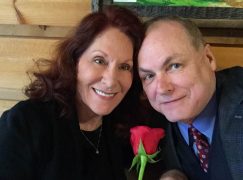 US composer and attorney wife are found dead at home

Kenneth A. Jacobs, 69, former head of University of Tennessee’s School of Music’s composition program, and his wife Melinda Howes Jacobs, 59, were found dead in their Townsend home on Saturday.

Around 12:30 pm sheriff’s deputies and Townsend Police responded to a residence on Kelly Ridge Circle in regards to a welfare check after receiving reports there might be a suspect with a weapon inside. As they approached the home, they heard a gunshot.

The deaths are being treated as murder and suicide.

Jacobs was a highly regarded teacher whose music has been widely recorded.