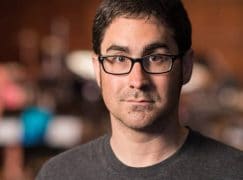 The new music scene in New York has been shocked by the death of Matt Marks, a horn-playing founder of the ensemble Alarm Will Sound and a willing participant in vocal and other roles.

No cause has yet been given.

Alarm Will Sound broke news of his death:

It is with deep sadness that we announce the passing of Matt Marks, founding member of Alarm Will Sound. Matt was a one-of-a-kind mix of playfulness and gravity who was integral in shaping our identity as a band. Beyond his personality, his work as a composer, performer, and new-music advocate touched many in our community. He will be deeply missed. Thank you to those who have shared your support. We appreciate your sensitivity during this difficult time.

So sorry, and shocked, to hear that Matt Marks died yesterday. A brilliant young composer, one of the driving forces in Alarm Will Sound and New Music Gathering, a champion poster of sometimes wry, sometimes uproarious social media comments, and a genuinely sweet funny guy, he mixed strands of classical influence and certain currents of pop deftly and astutely in his music, and was one of the bright lights of the New Music — one of the musicians who made it the vibrant place it now is. Just a day before his death, he was among the recipients of an NEA grant to support the staging of his opera, “Mata Hari.”

His own music aside, he was also a brilliant arranger – something he did, like seemingly everything else, with seriousness and humor intertwined. One of his contributions to the Alarm Will Sound repertory was this orchestration of the Beatles’ Revolution 9 (linked below) – something I played for my music criticism class (along with the original) at NYU nearly every year. RIP, Matt Marks and deepest condolences to Mary Kouyoumdjian, another very fine composer, and Matt‘s fiancée, and to all his friends and colleagues at AWS, NMG and elsewhere.

It is with great sadness and heartbreak that I announce the death of the love of my life and best human being I have been lucky enough to know, Matt Marks. Matt passed away this morning suddenly. Thank you to those who have shared their outpouring of love and support to myself, his friends, and his incredible family. We appreciate your sensitivity during this difficult time.