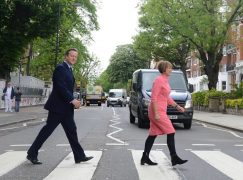 Shed a tear for loving Tessa

Tessa Jowell, who died today of brain cancer at the age of 70, was Secretary of State for Culture, Media and Sport in the Blair Government for six years, 2001 to 2007.

Unlike most holders of that office, she loved going out.

You would see her at concerts and theatre her eyes alight with excitement. Backstage, she would tell artists how much they are loved. A party loyalist who once said she would throw herself under a bus if it helped Tony Blair, she did not hesitate to pose with political enemies – here with David Cameron on the Beatles crossing – if its served her cause, in this case winning the Olympics for London.

Her end was swift, sad and – as so often with Tessa – geared to the public good. Stricken with brain cancer, she made a heart-rending speech to the House of Lords urging better care for patients and more effort to beat the cancer blight.

I last saw her at a mutual friend’s house a few days before the Brexit referendum. Her party had fallen into extremist hands and she feared and loathed the coming Brexit victory, but Tessa was upbeat as ever, bubbling over about her teaching post at Harvard and quizzing me about what was cooking in the music world. She bore rancour to no-one and saw hope where others saw only darkness.