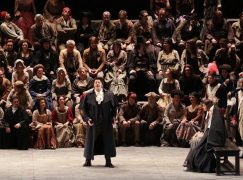 Riccardo Chailly opens with Verdi’s Attila, Davide Livermore directing, Abdrazakov in the title role. He will also take on the Italian première of the first version of Manon Lescaut, David Pountey, directing, with Maria Jose Siri.

Welser-Möst will also conduct Ariadne auf Naxos, with none other than Alexander Pereira making his La Scala debut as Haushofmeister. That chap could go far.

Bartoli returns in a new Giulio Cesare by Robert Carsen.

Two very young conductors get their first bite of the baton – Michele Gamba (ex-Pappano and Barenboim assistant) for L’elisir d’amore (Feola, Grigolo) and Lorenzo Viotti in the symphonic season.

You can see the full lineup at Gramilano here.

Just in: Hilary Hahn’s had a girl »