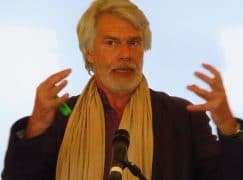 Short-term London boss is sh*t out of Berlin

Tanks (and worse*) were planted on his forecourt when Chris Dercon, head of London’s Tate Modern, was placed in charge of Berlin’s Volksbuehne, a left-wing theater long run by the modish Frank Castorf.

Dercon, a Belgian modernist, had never run a performing arts establishment before.

Berliners greeted him with daily parcels of faeces* placed at his office door. This big.

Now the city’s Culture Senator Klaus Lederer has announced Dercon’s immediate resignation. ‘Both parties have agreed that Chris Dercon’s appointment has not worked out as hoped,’ he said.