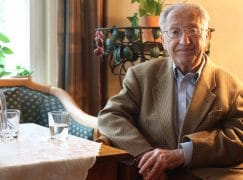 Will the Berlin Philharmonic remember its 90 year-old dropout?

Hellmut Stern, born in Berlin and for 34 years a front-desk player in the Philharmonic, will turn 90 in May.

A fugitive in China during the Second World War, he was spotted as a bar pianist in Jerusalem by Isaac Stern and sent for audition as a violist to the Israel Philharmonic.

He moved on to orchestras in St Louis and New York before returning to Berlin and playing in the Philharmonic under Herbert von Karajan for 34 years.

I got to know Hellmut when he was a leader of the Karajan rebels in the orchestra, fighting the orchestra’s subjugation to the maestro’s financial empire. He was enterprising, principled and utterly fearless.

After Karajan’s death he helped organise the Berlin Phil’s first trip to Israel with Daniel Barenboim.

He published a memoir, Saitensprünge, and now lives in Florida.

I hope the orchestra does something to remember his 90th birthday, on May 28.

« Government to orchestra: Give us the money back

French violinist brings Thibaud back from the dead »