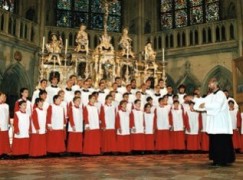 A dispatch by the composer Graham Lack:

For many years now the two main Christian churches in Germany, the Katholische Kirche (representing the Catholic faith) and the Evangelische Kirche (essentially the Protestant/Lutheran tradition) enjoyed a good relationship with GEMA, the “Gesellschaft für musikalische Aufführungs- und mechanische Vervielfältigungsrechte”, the German equivalent of PPL PRS for Music in the UK.

Each parish church paid via its head office an annual, one time, lump sum of €45 to cover all concerts taking place in a church building, liturgy excluded. All each parish church needed to do up to now was submit a “music list” of composer names and works performed, without receiving any additional post-concert bill as music-making was covered by a blanket agreement.

Upon receiving each list, GEMA paid royalties to the composers. Interestingly (as with concerts in regular concert halls), this was done neither on the basis of pre-concert ticket sales and money taken at the box office, nor was it done according to the promoters’ apparent net profit: composer royalties are independently based and calculated according to the length of each work and the performing forces required, regardless of what happened promoter side. This is entirely fair when compared to what happens, or does not happen, in the UK one might note, where promoters of classical music pay a percentage (standard 4.8) of net admission receipts. Hence, GEMA paid out substantially more money to composers than was ever received from the churches.

Some time during 2017 GEMA raised the parish fee from €45 to €75. The Evangelische Kirche quickly settled the issue and signed a new agreement. The Katholische Kirche refused the new tariff point blank. So, as of 1 January 2018, each Catholic parish church in Germany that presents concerts of church music is faced with a GEMA bill for performing music that is not in the public domain.

To understand the enormity of this one needs, as I say, to grasp the way the GEMA system works: a promoter in Germany pays a fee not according to income from the concert, but based on the greatest possible income, or “targeted gross”, if the concert were to be full, regardless of actual takings or profits. The GEMA fee is actually calculated according to the size of a space in square metres (be it a church or a concert hall), the total number of seats, and the price of the tickets. The GEMA fee for a sold out concert would be the same for one with only 10% attendance.

Composers’ royalties are calculated, as explained above, independently of the promoter/GEMA calculation. Again, this is entirely fair. One example should suffice: the composer of a string quartet (four independent polyphonic voices, i.e. four players) lasting three minutes receives the same royalties regardless of the size of the hall. The same goes for a composer who has written a work for very large orchestra, one with 46 independent parts (16 violins count as one “polyphonic voice”) that lasts 70 minutes. The same royalties are paid to the composer whether the space has 2400 seats or 400, or whether the ticket prices were ca. €80 or €15, or whether the promoter made a profit or a loss.

The upshot is that many concerts are being cancelled by Catholic parishes. German choirs planning a longer work by John Rutter, are finding that their parish can not or will not pay a GEMA bill that might amount to anything from, say, €120 to €800. Composers of sacred music urgently need the Catholic Church in Germany to negotiate a new deal with GEMA.

Here’s more on the subject in German.

« Boston has a new principal cello