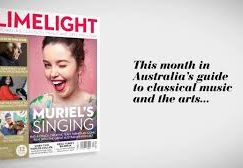 The monthly magazine and website Limelight has gone into liquidation. The March issue has been cancelled and staff have been laid off.

Originally a broadcast magazine called ABC Radio 24 Hours, the publication was renamed Limelight in 2003, sold to Haymarket (then owners of Gramophone) in 2006 and rescued by a local independent in 2014.

Last year, it was transferred to a not-for-profit company called Arts Initiative Australia.

UPDATE: Back from the dead…

« Salzburg refuses to be City of Culture