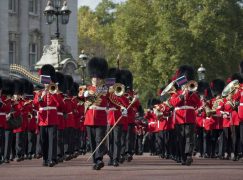 Elisabeth Braw reports in the FT that cuts are planned for the best drilled musicians in the world:

A country’s military music-making matters and reflects its military prowess. In countries such as France, Britain and the US, military music is not an afterthought but a bona fide career for accomplished musicians. Although they are trained soldiers, the musicians spend most of their time rehearsing and performing…

« A violinist emerges from Turkey’s crackdown

How they made records in the golden days »