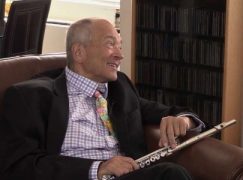 Death of a New York maestro, 74

We have received sad news of the death yesterday of Paul Dunkel, brilliant flute player, co-founder of the American Composers Orchestra and all-round live-wire.

After a solo career on the flute, Paul Dunkel became music director of the Denver Chamber Orchestra and a busy guest conductor with a strong interest in contemporary music.

In 1978, Dunkel co-founded and picked the players for Dennis Russell Davies’s American Composers Orchestra. He acts as both manager and principal flute, later a resident conductor.

In 1983 he founded the Westchester Philharmonic, which he conducted until 2008. Since then he has been principal flute with New York City Ballet.