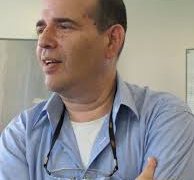 An Israeli conductor is exposed as a boy molester

Then journalist Asaf Harel in Haaretz has exposed one of the most respected teachers and conductors in Israel as a persistent predator on teenaged boys.

Harel, himself a former student of the conductor, says Menahem Nebenhaus was a revered figure at the elite Telma Yellin School and across Israeli musical life. He has collected testimonies from a number of former students. Some incidents were reported to the school and to the police, but no judicial action was taken.

Nebenhaus conducted the Telma Yellin school orchestra and took it on tours in Europe. He also conducted the IDF orchestra, the Ra’anana Sinfonietta and others.

He has not responded to the report.

You can read and watch the report here (in Hebrew).

« A Rostropovich museum is put up for sale

Is this Finland’s most influential musician? »