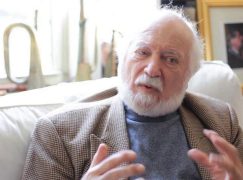 We have been informed of the death on December 31 of Maurice Peress, one of Leonard Bernstein’s assistant conductors at the New York Philharmonic, later music director of the Kansas Philharmonic and an influential music professor. He was 87.

Peress had an international career, working at the Vienna State Opera in 1981, the Prague Sprng Festival in 1988 and subsequently touring energetically in China.

He began teaching at the Aaron Copland School of Music at Queens College in 1984, founding a degree program in conducting and leading the Queens College Orchestra.

He is the author of Dvorak to Duke Ellington: A Conductor Explores America’s Music and Its African American Roots (OUP, 2004).

« The difference a new concert hall can make

First reports of the Met’s Tosca: Yoncheva saves it »