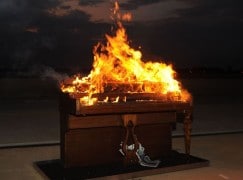 Album of the Year? It has been a vintage season for pianos

Is it that time already? Time for the Lebrecht Album of the Year award….

In these diminished times, any year that yields a couple of releases that can rank with, and perhaps displace, the legends of recording history must be counted a good one. On these terms, 2017 was a pretty good vintage. There was an impressive Berlioz Les Troyens from Erato, a Hänssler retrieval of the last known recital of Dietrich Fischer-Dieskau, the first in a promising Chandos series of the orchestral works of Richard Rodney Bennett and, at the opposite end of the scale, a Jonas Kaufmann assault on both tenor and mezzo parts of Das Lied von der Erde – a Sony production of such epic awfulness on every front, including sound quality, that it will stand the test of time in my cabinet of deathless horrors.

Not a bad year, then, and for the piano absolutely epic….

Read on here to discover the album of the year.

« A British tenor dies in Germany