If the name Laurence Crane does not spring instantly to mind, do not feel too bad about it.

Crane, 56, has been composing minimalist music for much of his life without ever making it onto the nightly news.

Tonight, he received a Paul Hamlyn Foundation award worth £60,000. 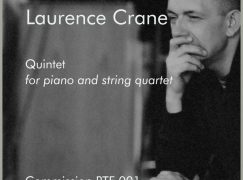 In February 2018, Crane will premiere in London, a new work for contrabass clarinet and ensemble, commissioned by Rolf Borch with funding from Norwegian Arts Council and composed for Rolf Borch and Cikada Ensemble.

In March 2018 Crane is composing a score for a new 12 minute film by Beatrice Gibson based on a script from Gertrude Stein. Written for clarinet, cello, electric guitar and electric organ, as commission for Borealis Festival, Bergen, Norway, it will be recorded by asamisimasa

May 2018 will see the release of a CD including first recording of Come back to the old specimen cabinet John Vigani, John Vigani part 3 by Jennifer Bewerse and Southland Ensemble on the label ‘A Wave Press’