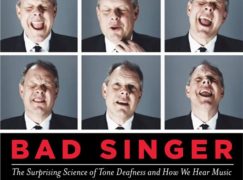 Anyone can sing: here’s proof

From our pals at Ludwig Van Toronto:

I’m tone deaf. I can’t sing. It’s usually accompanied by a smile or laugh, but the message is both clear and absolute. And wrong.

Lorna MacDonald is Professor of Voice Studies and Vocal Pedagogy at the University of Toronto, and she puts it even more strongly. “That’s a blatant lie.”

Of all creative endeavours, singing is perhaps the most poorly understood. To the chagrin of vocal teachers everywhere, singing is the one pursuit where you will be told, you can’t sing, so don’t bother. Parents will readily pony up the resources for acting lessons, or soccer, but when it comes to the ability to sing, many people are still under the impression that it’s something magical – you either have it, or you don’t.

A study of undergrads at Queen’s University, found that about 17 percent reported themselves as being tone deaf. It’s such a common fallacy in our society that it has led to a world of singers — the small minority — and non-singers — the vast majority. But is that really based in reality? Science — and those vocal teachers —  say no….

The long weekend read: Why Brexit won’t win the next election for Tories or Labour »