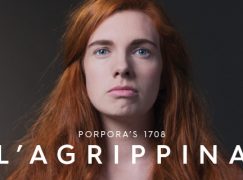 What happens when you stage a rare opera? Nobody comes to review

The Barber Inistitute at Birmingham University is presently putting on the first performances of Nicola Porpora’s Agrippina since its premiere in 1708.

You’d have thought that might have attracted a bit of attention. Nothing of the sort. Locals are seething that the opera has been ignored by national critics. One of them, PhD student Sara Clethero, has sent us her review.

Although we are not a review site, we make an exception for this opera – otherwise it might go unnoticed for the next 309 years.

A race against time

I fought my way through the cycle race traffic on my way to the Barber Institute at Birmingham University to see Porpora’s Agrippina and I was so glad I did. The singing was superb, the orchestral playing joyfully precise, and the production an inspiration to see.

‘Popora’s cheerful unconcern with decorum’ in the words of Prof. Andrew Kirkman, the musical director, is given full rein, making for a refreshingly pantomimic acting style in some cases and a very direct delivery of the recitative text (translated into English)  – necessary, since the performance lasted some four hours. The most undecorous performances were the duets between bass baritone Marc Labonnette, as the servant Planco, an extraordinary voice which could go anywhere (does he sing Wagner?) and Charlotte Beament singing his ambivalent female collaborator.

Kirkman calls this opera by Handel’s heavyweight rival ‘a wasp’s nest of intrigue and incest’. He conducted with finesse and precision, setting the singers and instrumentalists free to do their formidable best. A multimedia stage design created a magical setting for the piece in the iconic, but technically limited, Barber Concert Hall.

Work of this freshness and immediacy gives me hope that we might be finally moving into a new era of opera performance, where the audience members are joyful fellow-travellers with committed performers rather than respectfully mute witnesses of a specialised, and ultimately irrelevant, art form.

An American musician grapples with (lack of) health insurance »