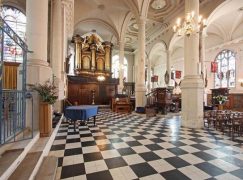 Heresy: They are playing caged football in the Church-without-Musicians

Every since we broke the story of St Sepulchre’s, the National Musicians Church, telling musicians they are unwelcome, signs have appeared of a civil war in London churches between traditional Anglicans and Evangelicals.

The battle has just taken a nasty new turn with a salvo from St Sep’s former director of music, Andrew Earis, describing how the church’s mission is being traduced.

Dr Earis writes: Gradually, PCC members left and were replaced with those from the new ministries. The “Henry Wood” meeting- and rehearsal-room was re­­styled the 24/7 prayer room. And the church was used for a whole host of new activities, including a not­able youth event with caged foot­ball in the church nave. Many felt that this was deeply unfaithful to the legacy and history that had been inherited.

Want to live above a concert hall? That’ll be 10 million Euros… »