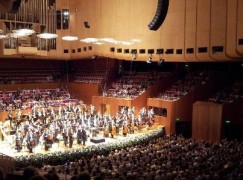 The Australian government is conducting a Same-Sex Marriage postal survey.

Many individuals and organisations in the arts have joined a YES campaign.

Not the Sydney Symphony Orchestra, which has publicly announced its neutrality.

Here’s a board statement from the SSO, issued after an angry response to its silence by former chairman Leo Schofield. It’s a heavily lawyered masterpiece of lily-livered equivocation and it will please absolutely no-one:

The SSO is a highly-respected organisation spanning more than 85 years with members, concert-goers, very generous sponsors and donors, not to mention loyal and committed staff and musicians, all of whom come from wide and diverse backgrounds and opinions.

It has always been the case that the SSO has engendered organisational initiatives and performances that reflect an abiding commitment to inclusiveness, fairness and acceptance and that the company has at its core a commitment to everyone in our community – regardless of gender, orientation, cultural background or religious beliefs – of performing music to the highest calibre for which the orchestra is celebrated around the world.

There is no question that the SSO strongly supports the rights of all citizens to place on the record their views, by way of the private and confidential postal plebiscite and as such, the company does not feel it has the right to take a position and commit our stakeholders to one side or the other and has decided it should remain neutral. We urge all Australians to respect the democratic process of the majority decision, one way or the other, in a spirit of goodwill and cooperation towards each other in a peaceful resolution.

« Exclusive: Peter Gelb wields the axe in a day of the long knives