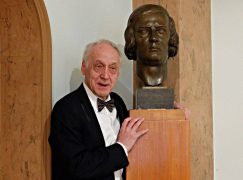 We regret to report the death of Pavel Egorov, head of piano at the St Petersburg Conervatoire and an international authority on Schumann.

He has been suffering from cancer for some time.

Pavel Egorov was my classmate not only at the Moscow Tchaikovsky Conservatory but also a fellow student of Tatjana Nikolaeva in the first two years of our studies there. Pavel and I were also united in our youthful romantic love and affection for the music of Robert Schumann, competition of whose memory he had won in 1974. I was less successful having received only a finalist diploma in the previous edition of 1969. I guess we were the Davidsbündler-brothers. And now one of us has gone on a journry of no return. Dear brother, before it will be my turn to go I will remain faithful to your memory and our common goals and ideals. RIP my dear Pavel!

Official biography: People’s artist of the Russia, professor of Special Piano Department, Pavel Egorov was born in Leningrad and graduated from the Moscow P. I. Tchaikovsky Conservatoire (1975), under the tutelage of T. Nikolaeva and V. Gornostaeva.

He was a prize-winner at the International Schumann Competition in Zwickau (Germany, 1974). At the same time he made his debut in the Grand Halls of the Moscow and Leningrad Conservatoires. Pavel Egorov performs in the best concert halls throughout the world, has toured in nearly every European country, and also in Canada, China and Japan. He has conducted master-classes in republic of Korea, Holland, Italy, Taiwan, and Sweden.

Pavel Egorov has made more than 40 solo, chamber and symphony programs for many Russian and foreign record companies (Melodia, Sony, HWA EUM, Intermusica).

Musical researcher and scientific editor, Honorary member of the International Schumann Society (Dusseldorf) and of the St. Petersburg’s Philharmonic Society, he was awarded the International Schumann Prize (1989), received the Order of Polish Government “For merits in culture” (2003), and has been elected a member of the St. Petersburg’s branch of the Russian Academy of Sciences, in the area of Education and Development of Science (2007).