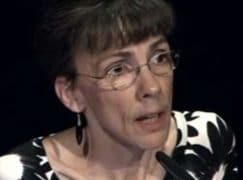 Eleanor Stubley, 57, associate dean of Graduate Studies at the Schulich School of Music at McGill University, Montreal, has not been seen since Monday.

A sufferer from multiple sclerosis, she uses a wheelchair and drives a 2004 blue Dodge Grand Caravan, license plate number 238 RQL.

Stubley needs medication, which she did not take with her when she disappeared. She has brown hair and brown eyes, weights 90 pounds (41 kg), and speaks English and French. Anyone with information, please call Info-Crime Montreal at 514 393-1133.

From her current McGill’s page:

Her current research initiative, Reaching Beyond the Given (sites.music.mcgill.ca/es/), will culminate in a book/film project tentatively entitled Moving Words, Moving Hands.  The work takes as its starting point the schism that has traditionally existed between the ways in which we describe and explain music in words and its experience in and through the body in performance.  Building on the doubleness of her own hands as the hands of a scholar and a performer, she explores the relationships, resonances, and dissonances between the movements of her hands and those of a sculptor, dancer, and visual artist, among others as she builds musical worlds in performance.  This work will, in turn, be used to expand traditional musical discourses to include musical performance and the embodied cognition that lies at the heart of the nature of music. Her phenomenological approach has been the subject of an extensive analysis in Wayne Bowman’s, Philosophical Perspectives of Music (Oxford University Press) and has been applauded for the way in which it uses film as a medium for integrating her artistry as conductor with the scholarly interests of her hand as a writer and for the ways in which research-creation projects use the exploration of movement in a variety of different artistic media to explore the infinite possibilities of the hand and music in all of its variety.