A Soviet institution has died

The death is reported, aged 72, of the popular Soviet-era composer Pavel Slobodkin, founder of the Весёлые Ребята (Jolly Guys) ensemble which sold 15.8 million copies of its 1966 debut album and 179,850,000 records overall.

Moscow’s Pavel Slobodkin Theatre and Concert Centre bears his name and has its own chamber orchestra. 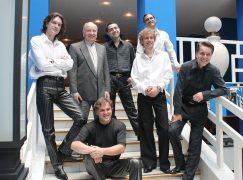