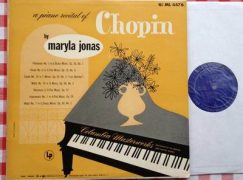 The pianist who grew too nervous to play

Harassed by the Nazis in Warsaw, Maryla Jonas escaped in 1940 to Rio de Janeiro by pretending to be married to the son of the Brazilian ambassador. Soon after arrival she suffered a nervous breakdown and spent time in a sanatorium. News arrived of the death of her first husband and her brother and she gave up her career.

A post-War visit by Artur Rubinstein persuaded her to return to the stage. On an icy Monday night in February 1946, she faced a near-empty Carnegie Hall and was acclaimed by a junior critic as ‘the finest woman pianist since Teresa Carreno’. Her second recital, a month later, was a sell-out.

Jonas was signed by Columbia Artists, the New York Philharmonic engaged her to open its next season, Columbia gave her a record contract and she married a noted endocrinologist Ernest G. Abraham – all in a matter of weeks.

It was all too much. She began to cancel concerts and the dates dropped off. In January 1951 she fainted on stage at Carnegie Hall midway through Schumann’s Carnaval. Critics began to note memory lapses and she became too anxious to accept further engagements.

Diagnosed with a rare blood condition in 1952, Maryla Jonas died seven years later at the age of 48.

Sony have just remastered her complete piano recordings. The piano sound is constricted and brittle, but the Chopin playing is fresh and powerful, a genuine artist with a voice all her own and a profound introspection. She seems to be playing entirely for herself.

A Soviet institution has died »