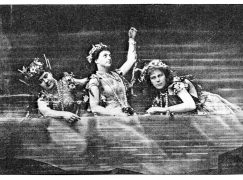 In their most recent collaboration, Concerto Köln and the internationally-renowned conductor, Kent Nagano, pursue a leading-edge project: in cooperation with scientists at the university and Musichochschule in Cologne, they are taking on Richard Wagner’s tetralogy, “The Ring of the Nibelung”. Their undertaking will provide the international opera scene with new impetus in historically-informed approaches to musical-theatrical works of the 19th century.

Jochen Schäfsmeier (Managing Director, Concerto Köln): “Concerto Köln is as honoured as it is inspirited to approach Wagner’s ‚Ring’ together with Kent Nagano and to be able to make an important contribution to the historical performance practice of 19th century music.”

For the first time, the entire “Ring” is to be viewed from an early music movement perspective: the instrumental and vocal styles as well as the staging at the time of Wagner will be examined over a period of several years and compiled to form a historically-informed performance concept.

Kent Nagano (Artistic Director): “It is due to historical performance practice that nowadays there is a much different understanding of many composers and their works than was standard 30 or 40 years ago. Moreover, thanks to historicized approaches, we have gained knowledge about instruments and playing techniques which opens up to us new, pioneering pathways into the interpretation and performance of our music.

Richard Wagner’s ‚The Ring of the Nibelung’ is probably one of the most researched compositions yet nonetheless, a systematic approach to the tetralogy from a historically-informed perspective has not been attempted thus far. It is therefore all the more important that such an undertaking is tackled and that, in romantic repertoire now as well, normality in terms of sound which seemed irrefutable so far is called into question.

I have collaborated together with Concerto Köln for several projects in the past and am convinced that I have found two most competent partners in the Cologne ensemble and the Kunststiftung NRW who are able to provide the scientific basis for a historically-informed reading of Richard Wagner’s ‚Ring’. Together we will pursue this endeavor and bring the music to the stage!”

The simultaneously scientific as well as artistic undertaking on such a mammoth scale requires tremendous effort with the additional aim of becoming a guide to performance practice of 19th century music and opera. The outcome, interpreted by Concerto Köln and Kent Nagano, will be performed from the 2020/21 onward. All research findings will be published in Open Access.

Prof. Dr. Hans-Joachim Wagner (Kunststiftung NRW): “For the Kunststiftung NRW, the support of the project, ‚WAGNER-READINGS’, is of significance in a number of ways. For several years, supporting artistic research has played a major role within the Kunststiftung’s funding programs – albeit with a primary focus on theater, dance and literature; examples of this being the Christoph-Schlingensief guest professorship for scenic research at the Ruhr University in Bochum, the Pina Bausch fellowship and the Thomas Kling lectureship at the University of Bonn. With ‚WAGNER-READINGS’, the base of support is expanded to the area of music, bringing art and research together in a so to speak ideal-typical way by conducting research into the complex correlations involved in the musical-theatrical production of Wagner and translating the results into artistic practice.”

Further information can be found at  www.wagner-lesarten.de