During next week’s G7 summit, the US President will attend a 7pm concert on Friday, May 26, at the Teatro Antico in Taormina, Sicily.

Myung-Whun Chung will conduct the Filarmonica della Scala in Beethoven’s fifth symphony. Andrew Powell tells us that Dvorak’s cello concerto was also planned, but may be omitted amid fears the concert may tax the president’s limited patience. 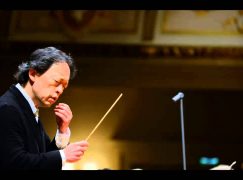 No tweeting during the concert, please.

UPDATE: Trump’s concert is dumbed down.