The Decca record label has quietly set up a music publishing wing under ex-Imagem and Boosey exec Natasha Baldwin.

Its first client is the multifarious Max Richter, author of the  8½ hour long SLEEP album, which has sold 100,000 copies.

He says: ‘I liked the idea of being the first signing to Decca Music Publishing, as we agreed to take a fresh outlook on how we approach music publishing together, at a time when the rules are changing as to how music can engage with the multidimensional creative landscape of today.’ 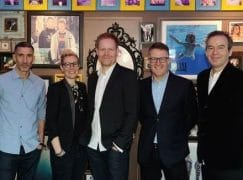