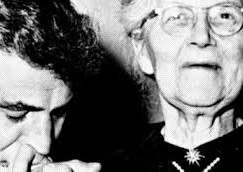 Who knew Nadia Boulanger could compose?

Two new releases suggest that Mademoiselle was more than just a teacher of great composers.

Read the Lebrecht Album of the Week:

In half a century of listening to records, I cannot recall ever hearing music by the noted French pedagogue Nadia Boulanger. Revered by a stream of American (Copland, Harris, Carter, Glass) and British (Berkeley, Musgrave, Maw) pupils, the formidable Mademoiselle deferred to the music of her short-lived sister Lily and barely spoke of herself as a composer. Two releases, newly landed, may help to adjust that misperception….