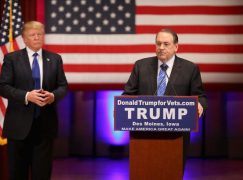 A Republican candidate speaks up for arts funding and the NEA

Mike Huckabee, the former presidential contender and Arkansas governor, has written an op-ed in the Washington Post today, urging president Trump to abandon his abolition of the National Endowment for the Arts.

As aspiring musician, Huckabee benefited as a child from the NEA.

If it seems unusual that a conservative Republican would advocate for music and the arts, don’t be so surprised. The largest increase in arts funding ever came under President Richard Nixon, and when budget hawks thought about cutting the minuscule funding of the NEA in the 1980s, it was no less than President Ronald Reagan who stepped in to make sure those in our poorest neighborhoods continued to have access to this road to academic success and meaningful way to express their creative gifts.