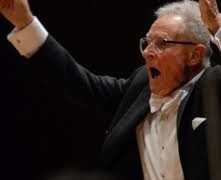 Stanisław Skrowaczewski died on 21 February 2017, at the age of 93. In a long and well-loved career, he was principal conductor of the Hall Orchestra and music director in Minneapolis, where he returned every season until this year. 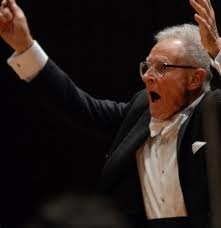 Born in 1923 in Lwów, Poland, Skrowaczewski began piano and violin studies at the age of four and composed his first symphonic work at seven. He played and conducted Beethoven’s Third Piano Concerto at the age of 13. Despite severe artistic censorship from the first Soviet occupation (1939-41), Skrowaczewski enjoyed Lwów’s flourishing cultural scene during his formative years, and immersed himself in the city’s musical life. During this period, Skrowaczewski learned English and followed the progress of the Second World War by listening secretly to the BBC. In 1941 he suffered a hand injury from a bomb explosion during the Nazi assault on the city which ended his keyboard career, at which point he decided to focus on composing and conducting.

Following the war, Skrowaczewski moved to Kraków, the new musical centre of Poland, and through his conducting and compositions was hailed a future star by the most prominent Polish composers of the time, including Andrzej Panufnik and Witold Lutosławski (whose Concerto for Orchestra he conducted in its U.S. premiere in 1958). In 1946 he became Music Director of the Wrocław (Breslau) Philharmonic, and then Music Director of the Silesian State Philharmonic of Katowice (1949-54), the Kraków Philharmonic (1954-56), and permanent conductor of the Warsaw National Philharmonic Orchestra (1956-59). In the 1940s Skrowaczewski studied in Paris with Nadia Boulanger, during which time he joined the avant-garde composer’s organization Groupe Zodiaque. In 1948 he conducted the Paris premiere of Shostakovich’s Fifth Symphony with L’Orchestre Philharmonique de Radio France. A few years later Shostakovich heard a Skrowaczewski performance of the Fifth Symphony and he praised the young maestro’s interpretation.

After many years working in isolated communist Poland, a breakthrough came in 1956 when Skrowaczewski won the Santa Cecilia Competition for Conductors in Rome. This award led to an invitation by conductor George Szell to conduct the Cleveland Orchestra in 1958, a significant moment which marked the next chapter of Skrowacewski’s international career. Engagements with the New York Philharmonic Orchestra amongst others followed and in 1960, at the age of 36, he became Music Director of the Minneapolis Symphony Orchestra (now the Minnesota Orchestra), a position he held for 19 years. It was at this point that he left Poland to become a U.S. citizen, having lived through the Second World War and three occupations of Lwów.

From 1984 to 1991 Skrowaczewski was Principal Conductor of The Hallé in Manchester with whom he toured Europe and the U.S. and recorded extensively, working with them regularly thereafter. In 2007 he was appointed Principal Conductor of the Yomiuri Nippon Symphony Orchestra in Japan and conducted them every year since, most recently as their Honorary Conductor Laureate. From 1979 he served as Conductor Laureate for the Minnesota Orchestra, conducting them annually for 56 seasons, an unprecedented length in the history of major American orchestras. In 2015 he was made Conductor Laureate of the Deutsche Radio Philharmonie Saarbrücken Kaiserslautern, following a long relationship and many celebrated recordings, including the complete Bruckner, Brahms, Schumann and Beethoven symphonies for Arte Nova Classics (now Oehms Classics). These received enormous critical acclaim and joined an extensive discography with other orchestras including the Yomiuri Nippon Symphony for Columbia Records, NHK Symphony, Minnesota, Royal Concertgebouw, London Philharmonic, London Symphony and Berlin Philharmonic orchestras, Deutsches Symphonie-Orchester Berlin, Orchestre National de France, Philharmonique de Radio France and The Hallé.

Skrowaczewski’s compositions have been performed and recorded widely and have received critical acclaim, with his Concerto for Orchestra (1985) and Passacaglia Immaginaria (1995) both being nominated for the Pulitzer Prize. Recent compositions include the widely performed Music for Winds (2009) and King Lynn and His 3 Naughty Kobolds (2014) for cellist Lynn Harrell. During the last year of his life he was composing a requiem for orchestra and chorus.

The recipient of numerous accolades, Skrowaczewski was awarded the Knight’s Cross of Polonia Restituta, one of Poland’s highest decorations, and has six Honorary Doctorates, awarded most recently by the universities of Minnesota and Wrocław, the New England Conservatory of Music and the Karol Szymanowski Academy of Music, Katowice. He is also the recipient of the Bruckner Society of America’s Kilenyi Medal of Honor and the Gold Medal of the Mahler-Bruckner Society, as well as five ASCAP Awards for his programming of contemporary music.

A comprehensive account of Skrowaczewski’s life and work can be found in Seeking the Infinite: The Musical Life of Stanisław Skrowaczewski, by Frederick Harris, Jr.

A Cleveland conductor has died »