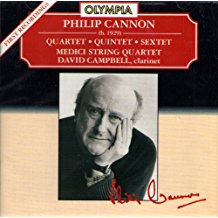 Death of a tonal British composer

We have belatedly been made aware of the death on Christmas Eve of Philip Cannon, a fine composer and teacher, at the age of 87.

A student of Imogen Holst, Vaughan Williams and Hindemith, he wrote against the modernist grain and was not played much on the BBC after 1960.

Despite this, his lovely piano concertino received more than 1,000 performances.

The Guardian has an obituary.