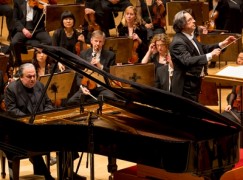 Yefim Bronfman: I keep playing for other pianists

The Russian-Israeli US-based virtuoso, in a candid video interview with Zsolt Bognar, confesses to constant attacks of nerves, accompanied by the need for approbation by other pianists.

‘I get very nervous… before a concert it’s a struggle to go on stage…. you have many fears,’ he confesses. ‘But then (you find that) everybody is in the same boat.’

‘I always wanted to have advice from others. I played a lot for Barenboim. I played for Radu Lupu, Murray Perahia… I always have the necessity to learn more.’

‘It’s a fascinating life, but achievement is not something I am proud of.’

Then Bronfman appears. Bronfman the brontosaur! Mr. Fortissimo! Enter Bronfman to play Prokofiev at such a pace and with such bravado as to knock my morbidity clear out of the ring. He is conspicuously massive through the upper torso, a force of nature camouflaged in a sweatshirt, somebody who has strolled into the music shed out of a circus where he is the strongman and who takes on the piano as a ridiculous challenge to the gargantuan strength he revels in. Yefim Bronfman looks less like the person who is going to play the piano than like the guy who should be moving it. I had never before seen anybody go at a piano like this sturdy little barrel of an unshaven Russian Jew. When he’s finished, I thought, They’ll have to throw the thing out. He crushes it. He doesn’t let that piano conceal a thing. Whatever’s in there is going to come out, and come out with its hands in the air. And when it does, everything there out in the open, the last of the last pulsation, he himself gets up and goes, leaving behind him our redemption. With a jaunty wave, he is suddenly gone, and though he takes all his fire off with him like no less a force than Prometheus, our own lives now seem inextinguishable. Nobody is dying, NOBODY — not if Bronfman has anything to say about it!

« Two violinists in a string quartet seal their wedding vows