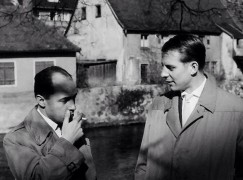 Roger Scruton sings the praises of the musical avant-garde

The ultra-conservative philosopher was invited to speak at the Donaueschingen festival, birthplace of post-war musical modernism. Being English, he was very polite to them in his opening remarks.

Then he put the boot in.

Important composers from Schoenberg and Stravinsky to Ligeti and Stockhausen, have been premiered in this place and before this audience. Along with Darmstadt, Donaueschingen has helped to restore Germany to the central place in European musical culture that it has occupied in the past and will always deserve. Now, in its latest and securest phase as the Musiktage, the Donaueschingen festival has become a symbol of musical modernism, and it is a great honour to be invited to speak from this podium to one of the most educated musical audiences in the world today. But in this short talk I will try to outline why I question the prominence in our musical culture of the experimental avant-garde….

The contrary obstacle also lies before us: the dictatorship of the difficult. Bureaucrats charged with giving support to the arts are, today, frightened of being accused of being reactionary. I suspect that everyone in this room is frightened of being accused of being reactionary. The history of the French salons in the 19th century, and of the early reactions to musical and literary modernism, has made people aware of how easy it is to miss the true creative product, and to exalt the dead and the derivative in its stead. The safest procedure for the anxious bureaucrat is to subsidize music that is difficult, unlikely to be popular, even repugnant to the ordinary musical ear. Then one is sure to be praised for one’s advanced taste and up-to-date understanding. Besides, if a work of music is easy to assimilate and clearly destined to be popular it does not need a subsidy in any case.